On July 4, to mark what should have been the start of one of cycling’s greatest annual events, the Tour de France, two great cyclists will discuss the highs and lows of their cycling careers and experiences.

Entertainment will be provided by Melbourne-based comedian Arj Barker.

The event is organised by the Gruppetto Fund, a sub-fund of the Australian Communities Foundation (ACF).

The event will raise funds for the Newsboys Foundation which distributes grants to not-for-profit organisations that work with vulnerable young people.

Newsboys Foundation CEO Sandy Shaw said: “I’m really looking forward to hearing directly from Cadel and George. Both have fascinating stories to tell. The event presents a rare opportunity to ask them the questions that you’ve always wanted to ask.”

Cadel Evans is the first Australian to win the Tour de France. He won the World Cup in 1998 and 1999 and placed seventh in the men’s cross-country mountain bike race at the 2000 Summer Olympics in Sydney. He is a four-time Olympian.

George Hincapie was a key domestique of Lance Armstrong and a domestique for Alberto Contador in 2007 and for Cadel Evans in 2011, when he and Cadel Evans won the Tour de France. He is the owner and general manager of UCI Professional Continental team Hincapie–Leomo p/b BMC.

Matthew Keenan is Australia’s leading cycling broadcaster. Matthew usually leads the SBS official world feed of the Tour de France. Matthew has called the world’s greatest cycling events including the Giro d’Italia, Vuelta a España and UCI Road World Championships also form part of Matt’s SBS commitments. He is an ambassador for The Baker Institute and the Carlton Football Club.

Check out The Age article here.

Congratulations to Akat Mayoum from Sunshine Heights Cricket Club for his amazing interview on ABC’s 7.30 Report about his cricket journey and the scholarship he received from Newsboys Foundation to go on the life-changing cricket tour to England, Italy and Spain in 2011.

In 2019, Akat continues to be an outstanding leader in the club, and in the community.

Congratulations also to Sunshine Heights Cricket Club for their important work with young people from diverse backgrounds and support in creating young leaders of the future.

Check out the ABC 7:30 video here and the article here.

Applications close on Wednesday 8 May 2019 at midnight and the finals will be held at Melbourne Recital Centre on Sunday 16 June 2019.

With support from the Newsboys Foundation, Phunktional & Melbourne Youth Orchestras have recorded a short documentary featuring young people from Robinvale recording original songs for the 6-part miniseries “Stories Beneath the Vale”. Watch the video here.

As part of the Newsboys Foundation 125th anniversary celebrations, we were delighted to partner with Kids Thrive and Arts Centre Melbourne to deliver the inaugural Kids Manifesto event on 22 October 2018. It was a great success! 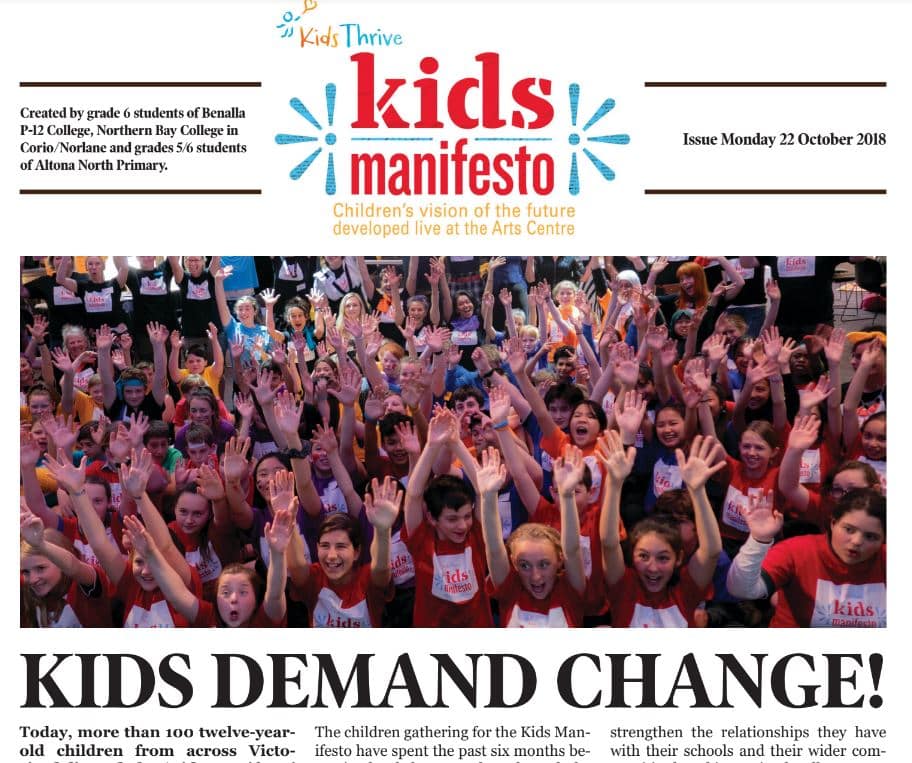 125 BPM concert with MYO and OUP at Melbourne Recital Centre to celebrate 125 years of the Newsboys Foundation was a great success. See the rehearsal pics here. 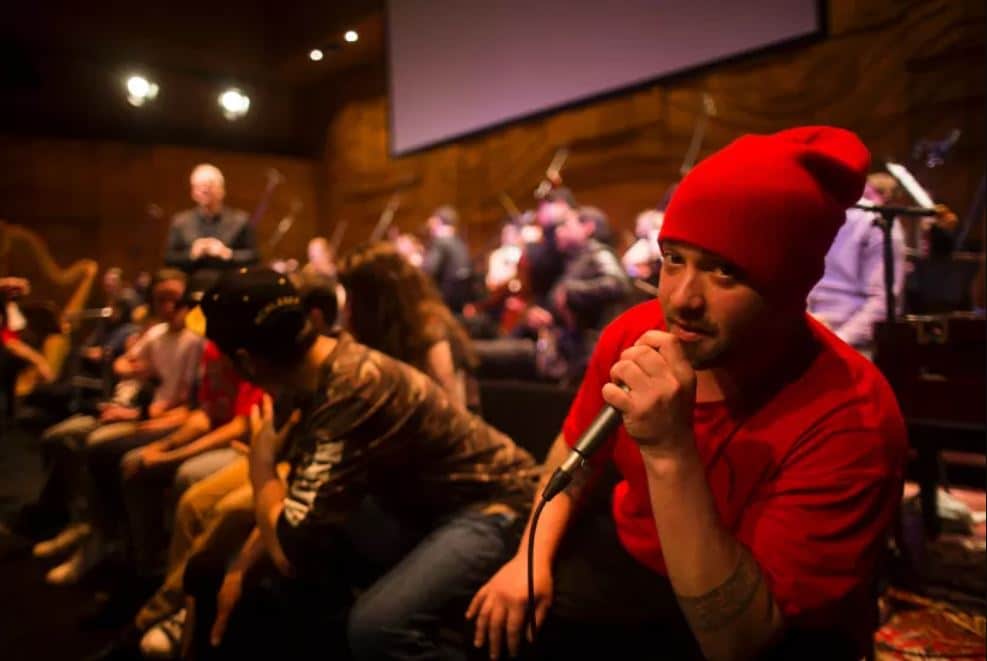 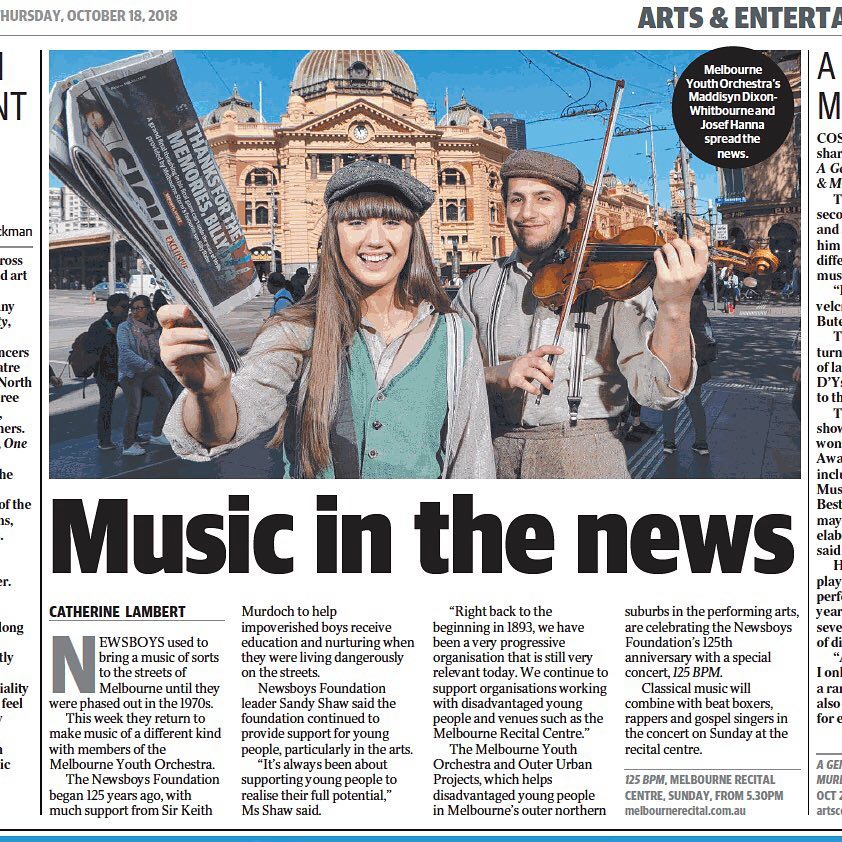 The I CAN Network Celebrates its 5th Birthday

Newsboys winner features in The Age

Seventeen-year-old trumpeter Trish Thompson was featured in The Age print edition (on 18 June) after winning the 2018 Newsboys Foundation Regional Music Award in the Bach Competition at the Melbourne Recital Centre. 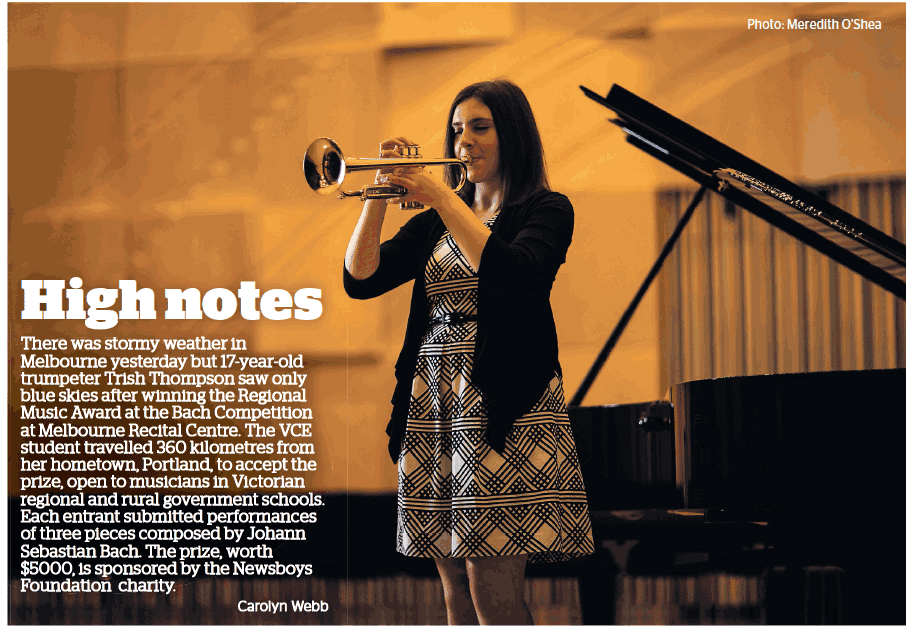 The Warrnambool Standard (on 20 June 2018) featured Trish’s story, including an interview on winning the Newsboys Foundation Regional Music Award.

Roghayeh Sadeghi tells The Age that when she arrived at Northern Bay College as a 12-year-old she could only say ‘‘hello’’. Now her ambition is to become a human rights lawyer. Roghayeh won the Newsboys Foundation Youth Leadership Award in 2015 at the VicSRC Recognition Awards.

VicSRC Congress 2018 Scholarship applications are open until 9am on 7 May 2018. More information can be found at the VicSRC website. Newsboys Foundation is a proud supporter of Congress and the Victorian rural and regional scholarships.

Richmond is the first sporting club signatory to a National Congress of Australia’s First Peoples Accord. Read all about it here.

Richmond will be the first sporting club to present at the United Nations. Newsboys Foundation is a proud supporter of the KGI. Read all about it here.

Hands On Learning Recognised by @HundrEDorg

Hands On Learning has been recognised by global education non-profit @HundrEDorg, as one of its 100 most innovative and inspiring education projects across the world! Read all about it here.

Vincent Shin: Australia’s first school lawyer confronts family violence in his past. Read all about it here.

Former Melbourne Newsboy Club member Mike Brady AM, famous for writing the footy anthem “Up There Cazaly” has been named Victorian of the Year for 2017. Read all about it here.

The Newsboys Foundation has funded Anglicare Victoria since 2011 to strengthen young peoples’ engagement with education and community activities. The community development project commenced in Ararat and has since expanded to Horsham, Stawell and Wonthaggi. David Law has managed the project which has been successful in increasing school retention rates and raising the aspirations of thousands of regional young people. The Hike to Higher Education is one of many initiatives within this project. Read The Courier article here.

The 2016 Newsboys Foundation Youth Leadership Award was won by Kelly Phan from Bendigo Senior Secondary College and the finalists were Thomas Velican from Nossal High School and Kristen Sellings from Yarram Secondary College. The 2016 Newsboys Foundation Regional Music Award was won by violinist Lily McCann from Colbinabbin. More details on the 2016 Awards here.

How students from across Victoria help shape the future of education and have a lot of fun at the Victorian Student Representative Council (VicSRC) Congress in 2016. Watch the congress wrap video here.

The Newsboys Foundation and Social Venture Partners Melbourne have joined forces for three years with the aim of helping 5000 young Victorians finish their education.

The two philanthropic organisations are backing Hands On Learning’s innovative education program which works to keep children in school by creating opportunities at school for young people to discover their talents and experience success.

“A staggering 10,000 vulnerable children are dropping out of Victorian high schools, training and apprenticeships every year, triggering fears of a generation lost in a world of future unemployment.”, Henrietta Cook, The Age, May 11 2014.

Hands on Learning is seeking to take its proven model to the next stage and sees the financial support from Newsboys and the capability skills from SVP as integral to that objective.

Over the past 16 years, Hands on Learning has helped more than 10,000 Victorian young people remain in school.

Multi-year grant funding for Hands on Learning has been approved by the Newsboys Foundation board and SVP is now working with Hands on Learning to develop the engagement and skills support plan for the next three years.

With their common areas of focus and shared philanthropic values, Newsboys and SVP Melbourne agreed they could amplify the impact of support for a non-profit many times over by joining forces. Combining the financial giving capacity of Newsboys, SVP will work closely with investees over a three-year period, providing these investees with access to the professional and business skills of its partners.

Newsboys Foundation CEO Sandy Shaw said:
“It is imperative that we get as many young people as possible engaged with their education so that they can have the chance to make the best life possible for themselves and to have a positive influence in their communities.”

SVP Partner, Catherina Toh said:
“This is an exciting opportunity for SVP Melbourne to work collaboratively with an established, well respected foundation and to have an impact well beyond what would be otherwise be possible given our current size.”

Hands On Learning Australia Executive Director Cam Wiseman said:
“Hands On Learning Australia is very grateful for the generous support of the Newsboys Foundation and Social Venture Partners to help transform more young lives. Our schools need more support to provide proven solutions to help keep at risk kids connected to school. The investment we make today will save society millions of dollars down the track. “

BACKGROUND
Newsboys started in 1893 as a club for newsboys, the children who sold newspapers on Melbourne’s streets, and became a foundation in 1973. Since becoming a foundation, it has provided grants to community organisations supporting young people aged 11 – 18 in Victoria who are facing disadvantage.

SVP Melbourne uses the engaged philanthropy model and works on building capacity in non-profits in Victoria with a focus on non-profits servicing disadvantaged children and young people through training and education.

Hands on Learning works to keep children in school by creating opportunities at school for young people to discover their talents and experience success.

Making a Big Difference in Ararat

Winner Charlotte Kube, 15, lives on a property between Nhill and Jeparit in north-west Victoria and is in Year 10 at Nhill College. Read more here

A new program supported by Newsboys Foundation is opening up employment possibilities for young people in Horsham, The Wimmera Mail Times reports

Newsboys Flagship Grant is paying dividends in the schools of the Wimmera Mallee. Flagship Grant partner Hands on Learning reports that it has expanded its program into an extra eight schools by June 2015. Hands on Learning said it hopes to further expand the program by an additional eight schools in the Wimmera Mallee by the end of 2015. Read more here.

A program at the Berry Street School in Morwell, which is supported by the Newsboys Foundation, is helping students make massive strides in their education and improving their lives. Read the report in The Age here.

Righteous Pups Australia, which is supported by Newsboys, make a big difference in the lives of young students.  Read  The Age story here.